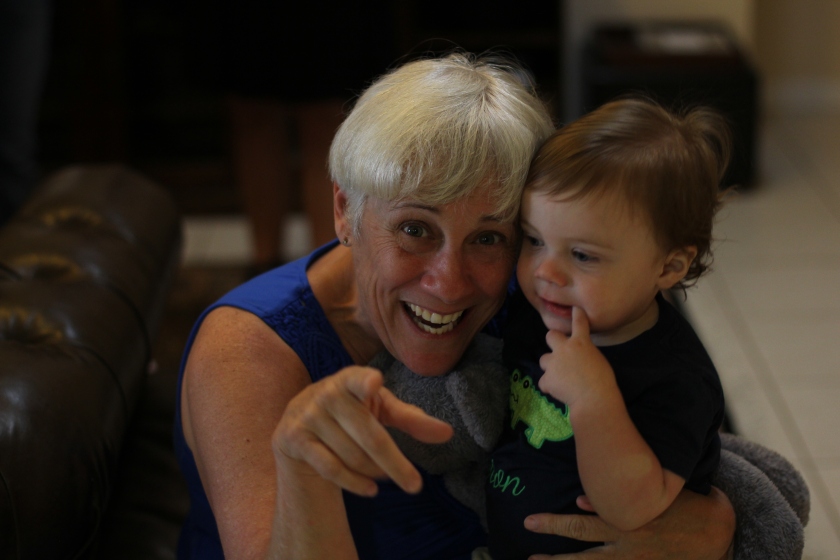 My name is Annie and I am 60 years old and about to start my DIEP Flap Journey,

My younger sister had breast cancer 12 years ago and was tested for the BRCA1 and BRAC2 gene and was negative.  We were all excited about that.  Well last year the oncologist called her and said that there was a new gene, PALB2 and wanted her to be tested for it.  She was positive so we all began the process of testing.  Brothers and Sisters.  So far all that have been tested are positive.  Odds are 50% but we seem to be at 100% so far.

Decisions needed to be made and suggestions were to be tested every 3 months, rotating with an MRI and Mammograms or have a Prophylactic Double Mastectomy.  Since my odds are 1 in 3, the thought of having tests done 4 times a year was not something I was looking forward to.  I have very dense breasts and always get the letter afterward stating that because of the density of my breasts it is hard to actually get a great result from the scans.

My husband and I made an appointment with the Breast Surgeon at TX Oncology SW Ft Worth,  Dr Jennifer Snow.  While waiting for the appointment we were sitting in the waiting area and watched as women came in for their chemo and other treatments and that actually helped us make the decision.  I did not want to be older than I am right now and having to go through Chemo and surgery.  Our decision was made before even talking to Dr. Snow.

Dr. Snow was wonderful in her exam and discussion of the options I have for the procedure.  She explained them very well and after an exam she told me about the DIEP flap procedure.  I have enough skin and tissue (fat) to do the procedure. She gave me a brochure from one of the surgeons here in Ft. Worth but said to do research for myself also.  I did not want to have implants and have to have them replaced at a later time.  I want to be finished with the reconstruction within a reasonable amount of time.

I called a friend who is a CRNA and talked to her about the choices I have in Ft Worth. I told her that they recommended Dr. Nabil Habash (http://txdiepflap.com) and she said that she knows him.  She has known him for quite awhile and likes his demeanor and ability.  I did some more research on him and found out that he has been doing this procedure for quite awhile with a less than 1% failure rate.  I probably read everything about DIEP flap surgeons in the State of TX and spent many nights searching as many blogs and stories I could find.   After much soul searching I decided to call Dr. Habash’s office and make an appointment

I was able to get an appointment with him the next week and he is wonderful.  He tried to explain the other procedures to me but I had already watched a 2-hour video of an actual DIEP flap surgery and was positive that I wanted to go this route.  He examined my breasts and tummy to make sure that I was a good candidate for the DIEP Flap procedure and he said that I had plenty of tissue to make me the same size I am now, a 40DD.  I asked to be made smaller.  As a man I do not think he understood why but I am tired of being so big.  He is going to make them smaller and back to the beginning of the race or not so close to the end of the race.

I am scheduled for surgery for Oct 31, 2016. I chose to wait until then so I could be done with my busy season at work.  We do a lot of physical work in Sept and Oct and did not want to stick my Company with accounts that needed work done.  My job is slow during the months of Nov, Dec and Jan so that will give me 3 months to be able to recover and be able to lift 50 lb. again.

I have to loose 15 lbs. by then also. I have lost 5 but it has been hard.  The work I do puts on muscle during this time of year.  I will add to this more as I think of things and post pre op pictures before the surgery.

Since this blog goes from last post first you might see the wound care and think that it happens to everyone.  Most people heal without any trouble but some, like me, do have trouble because of age or skin problems.  Mine was  because of being so big and wanting to reduce my size.  Please do not be discouraged by the pictures because as of 3/17/17 everything is completely healed and the scar should be gone after stage 2.  So completely satisfied with my results.

This is a text widget. The Text Widget allows you to add text or HTML to your sidebar. You can use a text widget to display text, links, images, HTML, or a combination of these. Edit them in the Widget section of the Customizer.